WHAT IS ADJUSTABLE / LAP GASTRIC BAND?

Gastric banding (laparoscopic gastric band) surgery in obesity; is a surgical procedure during which a ring made of silicone is being wrapped around the upper part(neck) of the stomach.

The band is made of silicone material, about one centimeter wide, 10 centimeters long similar to elongated finger, carrying an inflatable balloon along its inner face upon necessity. During the surgery, the band is inserted into the abdomen in an open flat mode and is tied in a belt style by curling the stomach tissue a few centimeters below the esophagus-stomach junction point.

The uppar part of the stomach is converted to a small chamber in the size of a wallnut due to the internode formation. The food on its way to the stomach, fills up this upper stomach chamber in wallnut size first. Food's going through downwards is pretty much slowen down, as the annular band partially strangles the passage. This slows down the speed of eating, which leads to quick saturation feeling , thus enabling slimming down. 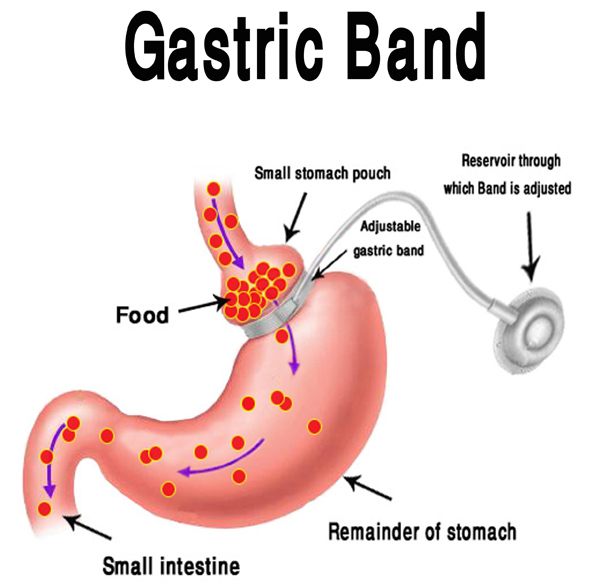 This surgery is a procedure that can be performed in less than an hour with a closed (laparoscopic) technique under general anesthesia. One day of hospitalization is sufficient. It is widely used in Europe and rarely used in America. The life-threat of the surgery is around 3-4 per thousand. Up to 5-10% of the patients may have problems due to the surgery or, in the long term, due to the presence of the band as a foreign object in the body.