WHAT IS METABOLIC SURGERY?

"Metabolic Surgery" is a relatively new concept. The digestive tract surgery applied to treat both Type 2 diabetes (Type 2DM) and obesity at same time is called Metabolic Surgery. It includes some of the operations that are usually performed for the treatment of obesity, as well as those that have recently been derived from them.

The concept of Metabolic Surgery in addition to altering the anatomy of the digestive system refers also to the physiological and biochemical changes that regulate the metabolism.

-100 years ago some gastric surguries performed showed positive signs of improvement in diabetes for the first time.

-In the 1980s, reports showing that at some patients after bariatric surgeries diabetes got improved were published.

-The period from 2008 to 2015, were the years when many scientific papers including the results of a series of reliable (randomized) clinical patients demonstrating that type 2 diabetes can be treated surgically were published.

"There is sufficient clinical and mechanical evidence to support the inclusion of metabolic surgery among antidiabetic interventions in people with type 2 diabetes and obesity."

"There is now sufficient clinical and mechanistic evidence to support inclusion of metabolic surgery among antidiabetes interventions for people with T2D and obesity." The following decision tree (algorithm) was accepted. 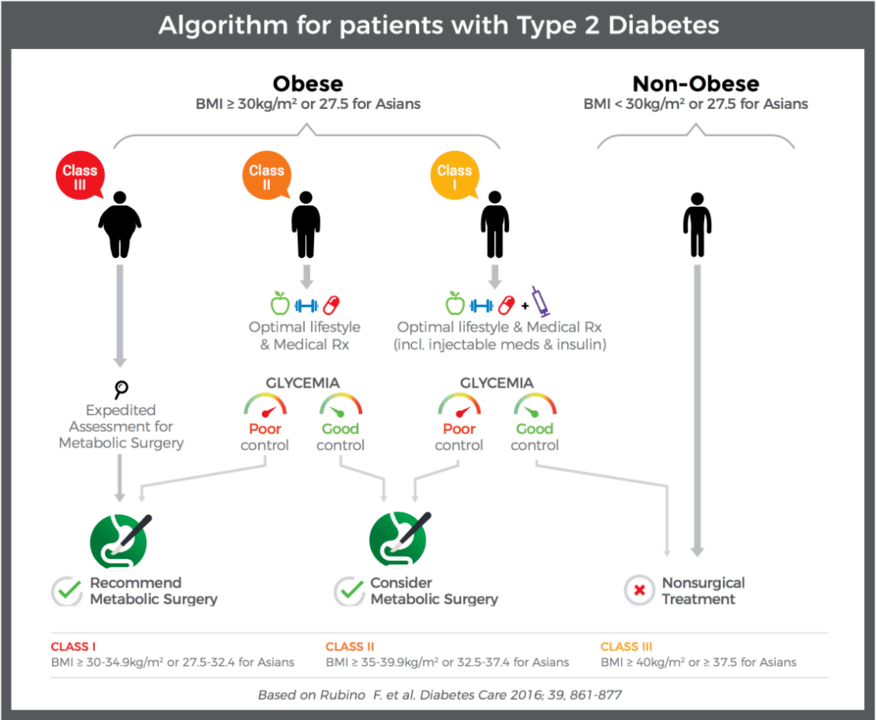