IS IT POSSIBLE TO CURE DIABETES WITH AN OPERATION?

In terms of "suitability for surgical treatment", it is possible to treat correctly selected patients with type 2 diabetes by metabolic surgery. In 80-90% of the patients complete recovery and in the rest partial recovery is achieved.

The majority of patients get rid of the widespread, progressive destruction of diabetes. After the surgery there are enabled to move to a healthier and more comfortable life without having to use medication and insulin.

How does this happen?

Neutralization of Type2DM diabetes as a result of metabolic surgery can be explained mainly by 3 mechanisms of the effect itself.

1- Calorie reduction: The operations performed at same time have restrictive effect to food and drinks consumtion. The amount of food intaken is reduced. Glucose production in the liver gets reduced too. The rapid improvement in blood sugar levels without weight loss in the first days after the surgery is due to these facts.

2- Weight loss: Slimming down and loss of excess fat tissue increases the sensitivity of the cells to insulin. Cells can get more glucose and use it, so thus blood sugar level gets adjusted. However, there should be considerable weight loss for this process to occur. It takes at least 4-6 months after the surgery.

3- Intestinal hormones: There is an indetification of approximately 40 hormones (incretin), which are secreted from the small intestine that have the potential to affect metabolic processes. Each of them acts by appearing in certain situations at specific parts of the tissues.

There are certain observations with explanations about the effect of these hormones (incretins). For example, insulin is physiologically released in response to the entry of sugar into the body. However, glucose that is taken orally and reaches the intestines creates a 50% stronger insulin response than glucose given intravenously. This is an evidence of the role of the intestines in regulating the blood sugar level.

On the other hand, if we make an observation from the first days after the metabolic surgery in which calorie intake is low and the period after months of considerable weight loss, we can notice that the blood sugar levels were kept normal and stabile in between. This gives us the right to stay focused on the role the small intestines and the intestinal hormones play.

The effect of bridging (bypass) that the metabolic surgery carries out with itself passes the food over the upper (proximal-jejenum) sections of the small intestine wholly or partially. The lower (distal-ileum) segments are getting reached by more food than usual. This is pointed out as the reason of the incretins modification in secretion quantity and excretion patterns.

The hormone which has the most important role in terms of blood sugar regulating effect is the GLP-1 hormone secreted from L cells in the lower section of the small intestine. It has strong insulin secretion capability in response to food intake. At same time, it is the increasor of the number of beta cells-stimulators of the insulin excretion in the pancreas.

All the food eaten after the metabolic surgery, even if it is very small ammount still reaches the lower section of the small intestine very quickly. Follows up of the GLP-1 inthe blood one month postoperatively, show levels 10 to 20 times higher than normal. This points to a significant stimulation of insulin production coming from the pancreas.

There is no presence of such a potent insulin-releasing potential at the individuals who attempt to lose weight or put the blood sugar levels under control only by dieting without undergoing a surgery. 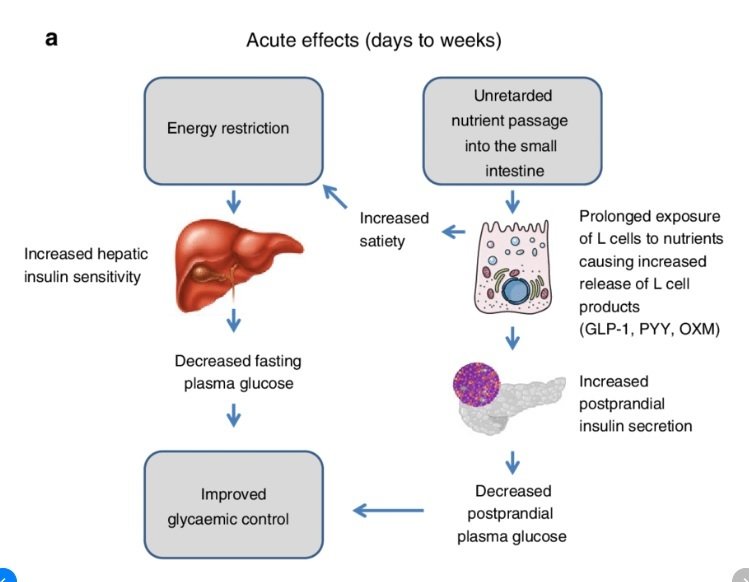 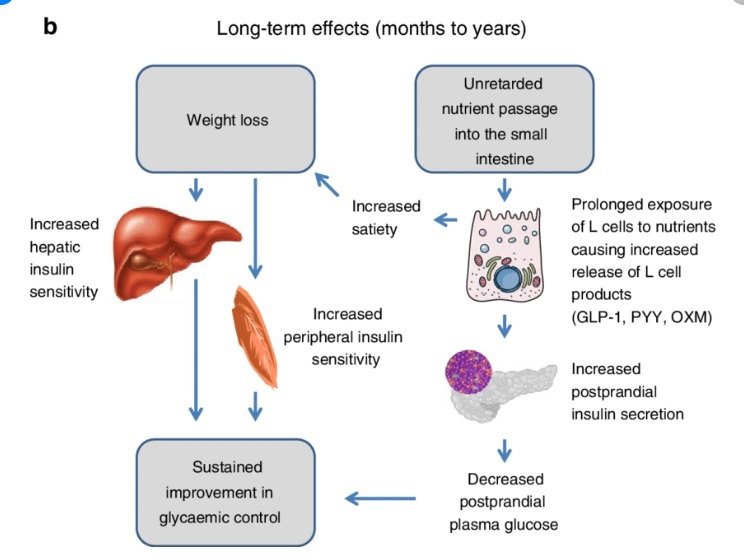 On the other hand, the K cells from the upper parts of the small intestine produce a hormone named as GIP hormone. Although this hormone has a mild insulin-releasing effect, its primary role is direction of the intaken food to the storage reserves in forms of fat and sugar. After the surgery the GIP hormone level remains low since the upper part of the intestines is put a side due the bypassing, thus bridging passes over the food above it. This results with weight loss due to the activation of GIP hormon`s fat tissue creation and sugar storage role it poses in response to food.

There are current ongoing scientific studies focusing on the impact many molecules (ghrelin, PYY, GLP-2, CCK, FXR, TGR5) excreted out from the digestive tract have to the blood sugar regulation.

As an outcome we can point out some occuring effects in codependency with the incretins, as following:
- The satiety center in the brain gets stimulated thus eating is being stopped.
- Food transmition from the stomach to the intestines is slowen down.
- Insulin production by the pancreas is increased. Sugar transmition into the cells gets increased.
- The consumption of sugar from the blood and the fat tissues increases.
- The conversion of nutrients into sugar storage in the liver is being stopped.

Blood tests 3 months after operation show increased levels of bile acids produced from the liver and circulating in the intestine compared to the preoperative period. This increase in bile acids is considered to stimulate more insulin secretion by increasing the level of GLP-1. In addition, the structure (morphology) of the small intestine appears compatible(adjustable) with the new changed form of the digestive system.

Microorganisms that are naturally present in the small intestine are in relevance to the topic. A healthy person lives with microorganisms 10 times the number of the human`s cells in his body called microbiota. Most of these (up to 3 trillion) found in the intestines, are identified and specified in certain sections, with certain rates of quantity.

In cases where bacterial diversity in microbiota decreases, thus the beneficial bacteria is decreased and harmful bacteria increased instead, the fermentation of carbohydrates and proteins causes harmful metabolites formation. This leads to insulin resistance, diabetes, obesity and cardiovascular diseases. After the metabolic surgery this disorder in bacterial distribution is getting back to normal and It is considered that this normalisation of the micro-flora has a role in obesity and diabetes recovery.