WHAT IS LOOP BIPARTITION (SASI-BYPASS) SURGERY?

Loop Bipartition Surgery Type2DM is one of the most successful operations in the treatment of diabetes. The most important feature of this success while providing the same purpose compared to other operations performed is in protection of the natural digestive function to a great extent.

RNY Gastric Bypass, Biliopancreatic Diversion, Sleeve Gastrectomy, Transit Bipartition are some of the metabolic surgeries well known through the past years. Loop Bipartition is a new surgical method featuring the same proven metabolıc effect provided by the above mentioned surgery types, representing a combination of those, with new rearranged design performed in more simplified pattern.

The operation, also known as Loop Bipartition, in the medical literature named as Single Anastomosis Sleeve Ileal Bypass, with its abreviation is also called SASI Bypass.

Loop bipartition surgery is consisted of two steps.
- The first step is to perform a sleeve gastrectomy which is slightly larger than the standard one.

- The second step is creating a passing over bridge (bypass-anastomosis) from the antrum section at the bottom of the stomach towards the small intestine.

The connecting level from the stomach to the intestine is usually 2.5-3 meters proximal part of the small intestine-large intestine junction (ileocecal valve).

Thus, having a tube stomach restricts intake of nutrients, facilitates saturation and weight loss and at same bypass surgeries with its outcome effect increase the activation of the small intestine hormone (incretin) in favour to metabolism regulation. It is a simple, low-risk operation design with successful results performing single cross-over (anastomosis). 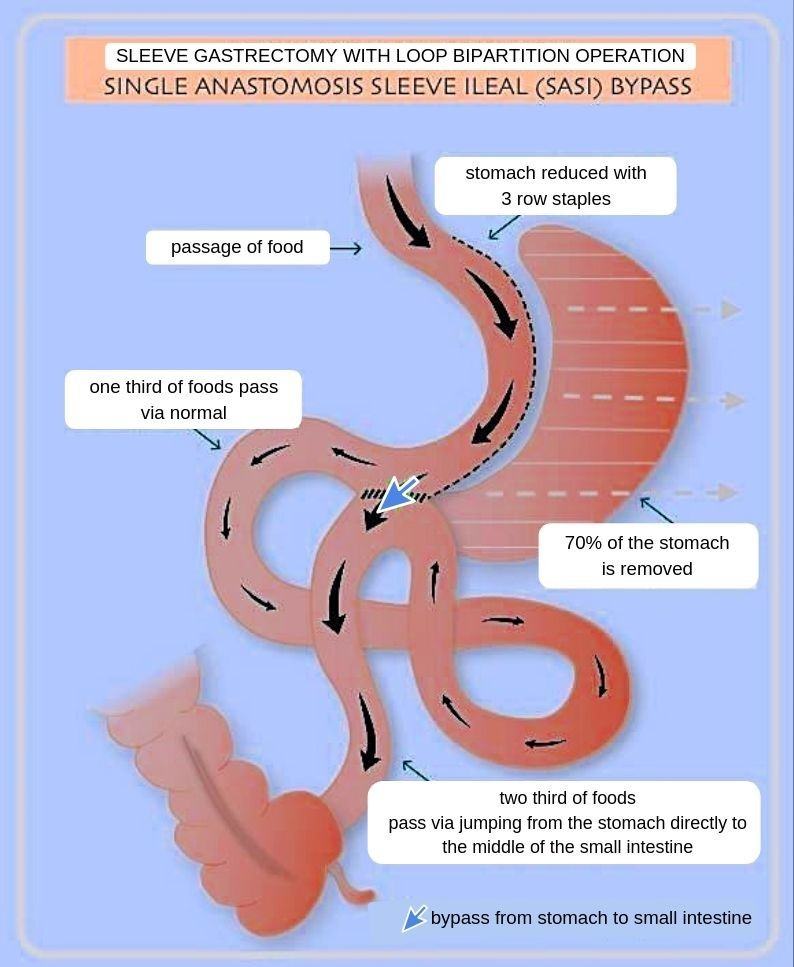